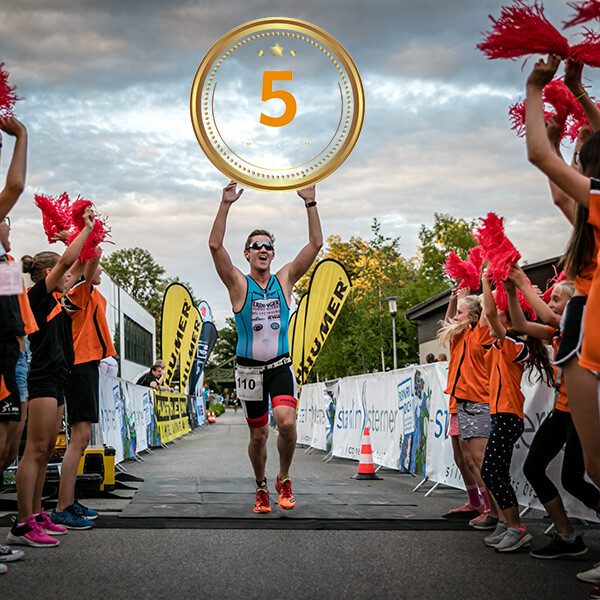 The starlim City Triathlon Austria Wels powered by Humer has reason to celebrate. This sports event will be held for the fifth time from 11.06.22 to 12.06.22. The premiere took place exactly on this weekend in 2018. We take this special anniversary as an opportunity to take a brief look back at the last few years and the development of the event.

According to the motto "Everything starts small", the City Triathlon is also constantly developing. From the very beginning, the LOC team around Thomas Alt wanted to create an extraordinary triathlon. During the brainstorming before the first event, many keywords came up: Modern, City Triathlon, spectator-friendly, multi-lap, night race, river swimming, cycling criterium, international races, etc. The fact that this was not possible to realise at the beginning of the event was clear. Everyone was aware that this could not be implemented from the beginning, but a lot has happened since the first edition in 2018. For one thing, the interest of participants has increased noticeably in the last few years and the course layout has also been constantly refined.

While 84 triathletes took part in the first event, almost 500 participants are expected for 2022. And although at the beginning the participants cycled through the expo grounds and ran along the river Traun, all three disciplines have now been relocated to the city centre. The organisers are particularly proud of this step in development, as apart from „Hamburg – The World’s Biggest Tri“ there is rarely a triathlon event in an urban area. It was precisely this requirement to hold a city triathlon in the middle of Wels that proved to be extremely difficult at the beginning.

The swim start as a challenge

The swimming discipline was a major problem for the organisers. Finding a way for all athletes to start at the same time in a flowing body of water with a 6m steep bank and under fair conditions was not an easy task. And in 2018, unfortunately, this was not yet possible. "Originally, we wanted to stretch a rope across the Traun for the swim start so that the triathletes could hold on to it. But in view of closer considerations, this idea was quickly discarded," smiles Dominik Exel, the LOC team leader for the swimming section. After countless variations, there was still no viable solution three weeks before the start and the LOC team was slowly coming under pressure.

Due to the urgency and the problems with the stream, the plan to position the starters across the Traun was postponed for the time being. With the help of the retired carpenter Werner Sturm, a wooden frame of a footbridge was built and eight 200-litre barrels were attached to it as floats. The first SilberHolz-pontoon was hooked in parallel to the Wels bank and the Trias had to launch out of the water.

Motivated by the successful premiere, an attractive solution was sought immediately afterwards in which all athletes could jump into the Traun at the same time under fair conditions. For more than a year, they worked on a 60×5 metre wide starting pontoon until the SilberHolz-pontoon could be lowered into the water in its new form.

Not everything went smoothly in the transition area right from the start. At the same time, the LOC also wanted to create a unique selling point and designed an indoor transition area. The exhibition hall next to the Traun was chosen as the venue. Available space, short transition area routes where none were crossed, everything seemed to be in perfect order. The big awakening came during the first inspection when the LOC saw the slippery floor on which it was impossible to run barefoot and wet. Without further ado, a quick solution had to be found here as well. The only way to maintain the indoor changing zone was to carpet the slippery surface.

The LOC team was supported by the company TECH², which provided more than 1,000m² of carpet as a sponsor. Due to the measures taken in relation to the COVID-19 pandemic, the transition zone was moved to the front of the exhibition hall in 2020. Similarly, the following year, no indoor variant was developed. Due to the Corona requirements, the new routes and the space problems in front of the exhibition hall caused by the increased interest of the participants, the LOC team decided to move the transition area again. The new location and venue for 2022 is the 10-metre wide Chestnut Avenue in Volksgartenstraße.

In 2021, the time had come. The event was restructured and the entire course was relocated to the city centre. "Besides the first organisation of a Junior European Cup, the prevailing COVID-19 measures and the preparation of a completely new bike and run course, this was by far the most elaborate and intensive organisational effort ever," recalls LOC head Thomas Alt. "In addition, we also had to set up two transition zones," adds Joe Dittrich from LOC Team Transition area. But the effort was worth it. The decision to move the bike course from the exhibition grounds to the city centre and to move the run discipline from the Traun to the old town of Wels was the right one.

The Wels Triathlon has created a lot of Highlights and the event has also received international praise and recognition for hosting the Junior European Cup in 2021: "We are happy to be here. We are happy to be able to come back. A format like the one here at the Wels Triathlon is what we want for the sport," said Martin Breedijk, Vice President of the European triathlon federation Europe Triathlon.

Due to the successful start to international racing, the decision was made to hold a Junior European Cup in addition to the Austrian National Championships in 2022.

The first successful efforts to organise a triathlon in Wels were made as early as 1985. At that time , the swimmers swam in the neighbouring gravel pond in Fischlham and the cyclists cycled outside of Wels. Almost 40 years later, the 1. Welser Schwimmklub , under the leadership of Thomas Alt, decided to revive the Wels Triathlon in 2018.