Geri Will and the Wels Triathlon 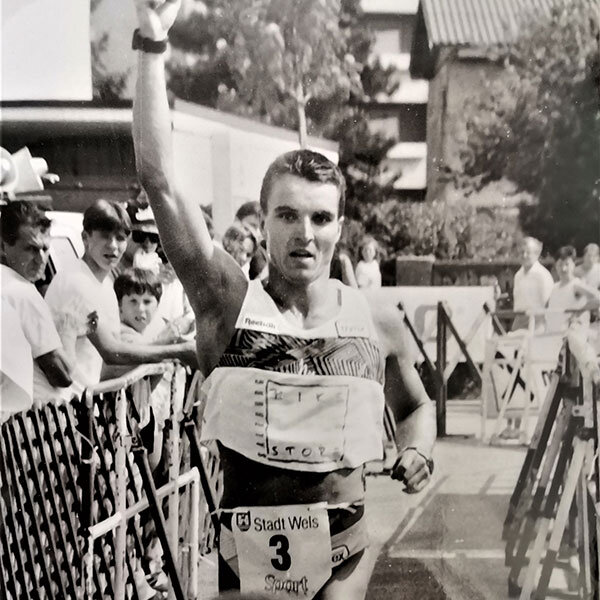 The triathlon routinier from Wels started his career in 1986 at the 2nd Wels Triathlon. In the meantime, he has won 1 World Championship and 4 European Championship titles AG! We asked the spoartcoach to blog about the history of the Wels Triathlon:

It is always very special for me to compete in my hometown of Wels, as I competed in my first triathlon in Wels in 1986 at the tender age of 18. In my function as a village elder or triathlon legend, as I am sometimes called, I would like to tell you a little bit about the eventful past of the Wels Triathlon.

The first triathlon in Wels in 1985 is one of the oldest triathlons in Austria, along with a competition in St. Kanzian am Klopeinersee and the Donauinseltriathlon. A lot has happened in the meantime. The fourth edition of the Wels Triathlon has taken place.

Drinks shower at the finish of the Wels Triathlon was customary

In the 1980s, swimming took place in the gravel pond in Fischlham. The bike course led via Eberstalzell and Steinhaus to Wels, where they changed to the run course along the Traun in front of the town hall. The finish line was on the Ring and was integrated into the annual city festival held at that time. This resulted in one or the other drink shower, from the often not so knowledgeable audience, on the last metres to the finish.

In the 1990s, after a break of a few years, there was a new edition with a swim in the Traun, a bike course with two laps south of Wels and a run again along the city river. Especially the start variant in the Traun was exciting. We had to hold on to a rope stretched across the Traun and swam in a square course with and against the stream. The number of triathletes starting was still moderate at that time. Due to the difficulty of swimming with the current, this variation was only done twice.

Elite cross national championship title was something special for me

After about 15 years without a triathlon in my home, the event site changed to the neighbouring municipality of Thalheim and in 2009 and 2010 the triathlon was held under the name "Taurus of Thalheim" as a spectacular crosstriathlon on the Reinberg. In 2010, even the Crosstriathlon State Championships were awarded to Thalheim. The spectator interest was enormous, the spectators were chauffeured by shuttle buses to the spectacular downhill sections on the Reinberg and at the Trodatsteg the spectators stood in rows of three. It was a very special race for me, because I was able to win the day in front of my home crowd and thus take the state championship title in the elite class. It has to be said that I knew every stone and root on the Reinberg and could ride the course almost blind.

Then another eight years passed until Thomas Alt thankfully awoke the Wels Triathlon from its slumber and set up a completely new triathlon concept of international calibre. With a highly motivated organisation team, including 4-time Olympic participant and 8-time Austrian record holder Günther Weidlinger and strong partners such as starlim and HUMER ANHÄNGER the fourth edition of the Wels Triathlon will be celebrated in 2021. This year, Wels will even host a European Junior Cup and the fastest junior triathletes from all over Europe will race through the city centre before the Triathlon City becomes the venue of the Triathlon National Championships in 2022.