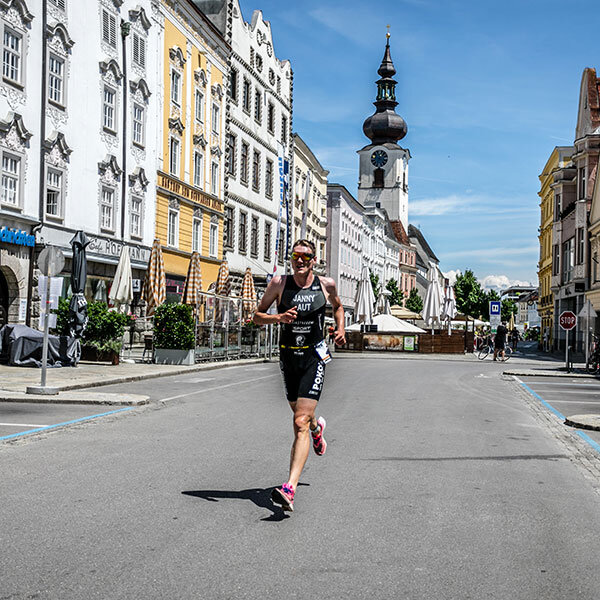 A city course is an absolute rarity in the triathlon scene. In Austria, the starlim City Triathlon Austria Wels powered by Humer is therefore a special event. Athletes swim, cycle and run through the centre of Wels at national and international level. A sporting event with numerous attractions.

Thrilling race for trias and spectators

A city triathlon offers many advantages not only for the sport itself, but in combination with a multi-lap format especially for athletes and the audience. In Wels, the spectators are there from the very beginning. They can follow the entire course of the race - from the swim start over the SilberHolz pontoon to the starlim finishing area - right up close. Whereas at many other competitions the athletes are often only seen in the start and finish areas and in the transition zone, and in between they run their kilometres alone, in Wels the athletes are close enough the whole time. The athletes pass by the HUMER hotspot 11 times.

"We deliberately decided on a multi-lap competition," explains LOC Thomas Alt, "Under normal circumstances, this modern variant of the competition gives you goosebumps, because the spectators are right there at the sporting action. In the last two years, Corona unfortunately threw a spanner in the works. However, to compensate for the limited opportunities for the public, we have set up a Live-Stream , which has been very well received." The organising team hopes to be able to welcome spectators again in 2022 and is optimistic about this wish.

The swim in the river, the curvy bike course and the run across the town square - these are the Highlights of the modern triathlon event in Wels. The start is in the crystal-clear Traun at the level of the museum bridge at the Welldorado Wels open-air swimming pool downstream. It is precisely this variant of completing the swimming discipline that guarantees very fast swimming times. Usually, a triathlon is swum in the lake and this is often a big challenge for beginners. In Wels, this hurdle can be confidently overcome, as the current is a great help. On the fastest swim course in Austria , an average flow speed of 0.7 m/s has been present at the event since its premiere in 2018.

The safety of the participants is paramount. True to this motto, a complete closure on the bike and run course was chosen from the very beginning. Especially the bike course is technically demanding due to the fast city course with several curves. Similar to a cycling criterium. An increased security presence was therefore unavoidable for this course through the middle of the city. Due to the complete closure, it is also possible to offer a Drafting Race, in addition to the classic non-drafting race. Apart from the safety aspect, this is another important advantage of the complete closure.

The impressive course through the centre of Wels and the historic city centre will make every athlete's heart beat faster. In the beginning, the runners ran along the river Traun, but since 2021, the Wels Triathlon has clearly advanced to a City Triathlon, after the running course was moved to the city centre: "We are very happy to be able to run in the most beautiful places in Wels," says Olympic participant and running expert Günther Weidlinger, who is responsible for the running part in the LOC team. The Burggarten, the Burggasse, the Stadtplatz, the Ledererturm - to name just a few sights - characterise the third discipline at the Wels Triathlon.

"We are happy to be here. We are looking forward to coming again. A format like this here in Wels is what we want for the sport." This quote comes from Martin Breedijk, Vice President of the European Triathlon Federation Europe Triathlon, in the context of the starlim Triathlon 2021, where a Junior European Cup was also held. The entire event team is particularly proud of this praise, as a high-quality staging of international competitions was one of the major goals.

But the organising team is not only breaking new ground with an internationally recognised city course. They have also decided to hold the top races as a Nightrace. "Together with the impressive ambience of the city course and the great proximity to the audience, the start in the evening with the finish at dusk creates a very special and unique atmosphere" enthuses Werner Michalicka, President of the Upper Austrian Triathlon Federation OÖTRVDue to the Corona-related measures, the "Nightrace" had to be changed into an "Individual Race" in the last two years. However, the LOC team of the City Triathlon is optimistic that the "Nightrace" can be held again in its usual form in 2022.