The fastest course in Austria 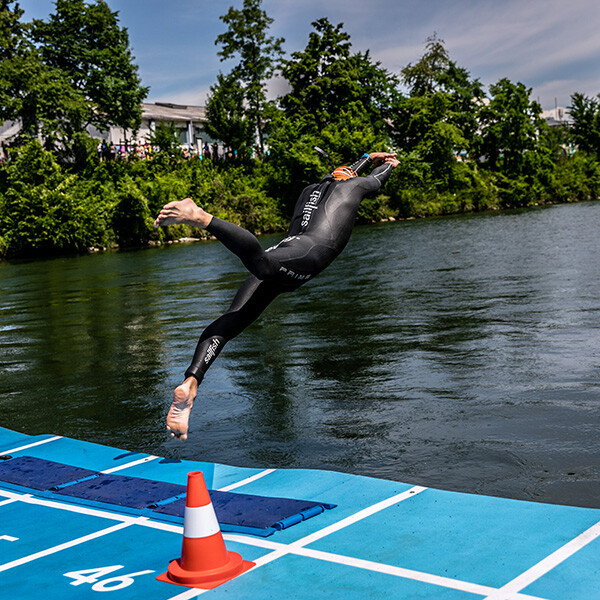 The SilberHolz pontoon as a starting pontoon at the starlim Triathlon is an impressive visual highlight. Developed and built by the LOC team themselves, they have been striving since 2019 for fair starting conditions in the city river and a breathtaking World Cup atmosphere on the triathlon swim course.

Downstream through the Traun

The exciting inner city course at the starlim City Triahtlon Austria Wels is unique in the scene. Not only on a national level, but also internationally, a modern multi-lap competition in the city is a rarity. Especially the swim course is unique in Wels. The athletes do not cross a lake as usual, but plunge into the cool waters of the Traun. "Riverswimming" in a triathlon competition is unusual in Austria and there are only a few competitions in other countries that are contested in a river. The swimming course in the river offers many advantages. Because the swim is downstream, extremely fast times can be achieved with the help of the current. This is a great incentive, especially for beginners.

At the time of the event, the flow velocity of the triathlon swim course is expected to be 0.7m per second, with the flow velocity decreasing towards the edge. Swimmers who need 2 minutes for 100 metres in a swimming pool can thus be almost 1 minute faster in the Traun and cover the same distance in 1:05 minutes."Due to the current, you initially have the feeling that you are flying over the water," explains LOC Team Leader Swimming Dominik Exel.

SilberHolz pontoon as a Wels flagship

The start at the Museum Bridge is an attraction in itself and caused the organisers a lot of headaches. Finding a way for all athletes to start at the same time and under fair conditions in a flowing body of water with a 6m steep bank was no easy task.

Together with the company SilberHolz from Offenhausen, an attractive solution for the triathlon swim course was developed. The athletes will enter the Traun via the "300m² SilberHolz-Steg", in which they will swim 750m downstream to the fire brigade boathouse. Dominik Exel, LOC Team Leader Swimming: "The SilberHolz-pontoon is one of the big challenges again this year. A 60×5 metre wide footbridge will be installed across the Traun to offer the participants international conditions in the form of a line up at the start".

More than 10 tons of wood and 17,000 screws were needed for this project. "We from SilberHolz are proud to be significantly involved in the implementation with this starting device in order to install a triathlon of international standard in Wels," says Norbert Silber, managing director of SilberHolz.

275 floats are provided by main sponsor starlim and give the footbridge the necessary buoyancy. Triathlete and building contractor Josef Reinthaler is also on board for this major project. In 55 individual modules, the footbridge is transported over the embankment into the river and assembled directly in the water to its impressive length. In order to guarantee the secure hold of the SilberHolz pontoon, it is fastened on the Wels side by two 12-ton construction containers from the Beschta company and on the Thalheim side to the bridge foundation of the museum bridge. The Maschinenringis also involved, sponsoring 2 tractors with winches to swing in the SilberHolz pontoon, including workers.

Different distances for the competitions

Due to the current and the resulting shorter swim time, the LOC team has agreed with the European Triathlon Federation Europe Triathlon and the Austrian Federation ÖTRV on different distances for the triathlon swim course. For the Drafting Races, the Junior European Cup and the Austrian National Championships on the sprint distance, the swim distance will be slightly longer. The participants will swim 950 metres instead of the regular 750 metres and the last 100 metres will be swum against the current. This measure will result in a customary swim time of about 10 minutes for the top field.

In the non-drafting races, the Nightrace and the Open Race, the triathletes will swim exclusively downstream along the planned Swim course on the sprint distance of 750m. Multiple winner of the starlim Triathlon Alexander Bründl only needs a little more than six to seven minutes for this. These fast swim splits are perfect for beginners, as the Traun helps them to get out of the water and onto the bike faster and more relaxed than usual. Also suitable for rookies is the high probability of being allowed to use wetsuits.