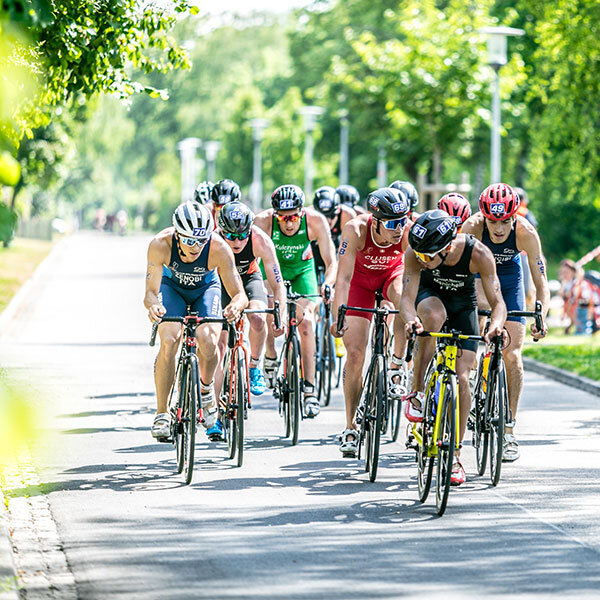 In 2022, the Triathlon Drafting Race Austria will take place in Wels. In addition to an international field of starters, the Austrian national championships will also be held in the sprint distance. An exciting race is expected.

A drafting race through the city

The "starlim City Triathlon Austria Wels" will take place in Austria for the fifth time from 11.06. - 12.06.2022. This still young triathlon event has generated enthusiasm among the public and athletes from the very beginning. The decisive factor for the great popularity is above all the exciting race format. A modern multi-lap competition on the sprint distance through the city centre is unique in Austria and also a rarity internationally. The thrilling course will pass the HUMERspectator hotspot at Weliosplatz 11 times, where the transition area and the finish line will also meet. To bring the spectators even closer to the action, a huge video wall will be set up next to the finish line so that they won't miss a single moment of the thrilling race. 11 cameras and two drones will be used for the video wall and the Live-Stream .

In 2022, international triathletes are expected to take part in the drafting race, as well as the Austrian national championships.

A special highlight is the swimming discipline. The swim will be 750m downstream in the Traun river in the direction of the city centre. A current speed of 0.5 - 0.9 m/s is expected for the event weekend, so fast swimming splits are guaranteed. "Due to the current, you initially have the feeling that you are flying over the water," explains LOC Thomas Alt. In the Junior European Cup and the Drafting Race, the swim distance will be slightly extended in order to swim the last metres upstream against the current. The spectators can follow this thrill directly and join in the racing action on the shore.

Due to the local conditions and the requirement to ensure fair starting conditions, a 300m² start pontoon will be stretched across the Traun. A total of 12 tons of wood and 300 floats are needed to enable a triathlon start with World Cup feeling.

Blue carpet in the transition area

From the very beginning, the Wels Triathlon has set itself the quality standards of an international race format and therefore the transition area will be set up accordingly. The renowned "Blue Carpet" will be rolled out on the 10-metre wide Volksgartenstraße to create an international race feeling. The team is particularly proud of the self-built bike racks in the club's orange colour, of which around 100 will be needed in 2022 at 3m each. Furthermore, each starting place will be equipped with an individual ID plate showing the start number, name and nationality.

50 curves - A bike course in a class of its own

Another special feature is the bike course. The fast and selective city course with many curves makes it very demanding and resembles a cycling criterium. There are a total of 10 curves to master on the four-kilometre lap. For the prescribed 20 km on the sprint distance there are thus 5 laps with a total of 50 curves. Although only the Junior European Cup and the Drafting Race will be held as slipstream races, a complete closure of the roads is standard at the Wels Triathlon for all competitions, including the Night Race and Open Race. "The safety of the participants has top priority for us and as a result a complete road closure on a city course is indispensable", explain Oliver Lehner and Werner Füreder from the LOC Bike Team.

City Run through the historical centre as a worthy finale

The running course through the city centre is the centrepiece of the City Triathlon. The organising team is particularly pleased to be able to present the most beautiful places in Wels on the running course. The course is exactly 5 km long and will be completed in three laps of 1.66 km each. The start will be on Volksgartenstraße through an avenue of chestnut trees, before the scene of the action leads into the picturesque Castle Garden of Wels. After the Castle Garden, the route turns into the old town and the Burggasse, which resembles a canyon of houses in Venice, before the course is led across the town square. At the end of each lap, the Ledererturm, the well-known landmark of Wels, awaits the triathletes before they finish at Weliosplatz, celebrated by the spectators, at the 8-metre wide and 5-metre high finish tower.

In the 2022 event year, all competitions will be held at the sprint distance. After the international premiere of a Junior European Cup in 2021, another race will follow this year, where the youngsters of the European elite will meet in Wels for a J-CC. "We are very happy about the trust of Europe Triathlon to organise a Junior European Cup again this year after the successful premiere", says Thomas Alt, LOC of starlim Triathlon.

The Night Race is celebrating a comeback. Already at the first event in 2018, the event was held in the evening hours and enjoyed great popularity. Due to the COVID-19 pandemic, in 2020 and 2021 it was changed to an individual race with a single start and held in the morning. A great revival will now be celebrated in 2022. The start is at 19:45, so that the race can be finished at 21:30 at the latest in a summer evening atmosphere. This year's Night Race will also feature the Austrian AG 40+ Championships.

It's hard to imagine the event calendar without the Open Race. It has also been part of the event since the beginning and attracts more and more triathletes every year. The Open Race is ideal for triathlon beginners.