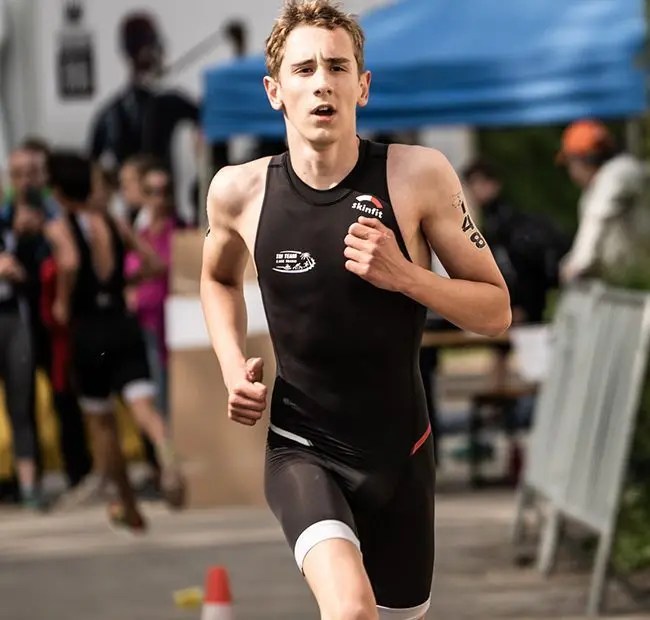 With Patrik Leitner, Tri Team 1. USC Traun presents another young hope at the "starlim Junior Europacup" in Wels. As winner of the youth class at the ÖTRV-Swim & Run in April in Südstadt, Patrik qualified for the European Championships in Alanya and thus also fulfils the standard for participation in the Junior European Cup races.

With the swimming performance of 9:02min over 800m shown there, the young triathlete now also holds the record for the fastest swimming time ever swum at this event.

Patrik started swimming training at the club at the age of six and was already very keen on sports at a young age. Subsequently, Patrik was also part of the Tri Kids group of the 1. USC Traun and, in addition to swimming competitions, he gained his first experience in various triathlon competitions of the Upper Austrian Power Kids Cup and later in national junior competitions.

In 2019, the now 17-year-old transferred to the talent centre in Linz, where he now has the opportunity to combine school with training. Already after the first year he became a member of the ÖTRV junior cadre due to his good performances.

"I am really looking forward to doing one of my first European Cups here in Wels, especially as it is ideally located because of the proximity to my hometown Traun. From my point of view, the race will be very exciting, because the swimming in the river is a constellation I have never seen before," said the young talent.

previousGeri Will and the Wels Triathlon

Analytical cookies are used to understand how visitors interact with the website. These cookies help provide information about metrics such as the number of visitors, bounce rate, traffic source, etc.

Advertising cookies are used to provide visitors with relevant advertising and marketing campaigns. These cookies track visitors across websites and collect information to provide tailored advertising.

Other uncategorized cookies are those that are being analyzed and have not yet been categorized.

SAVE AND ACCEPT
Unterstützt von