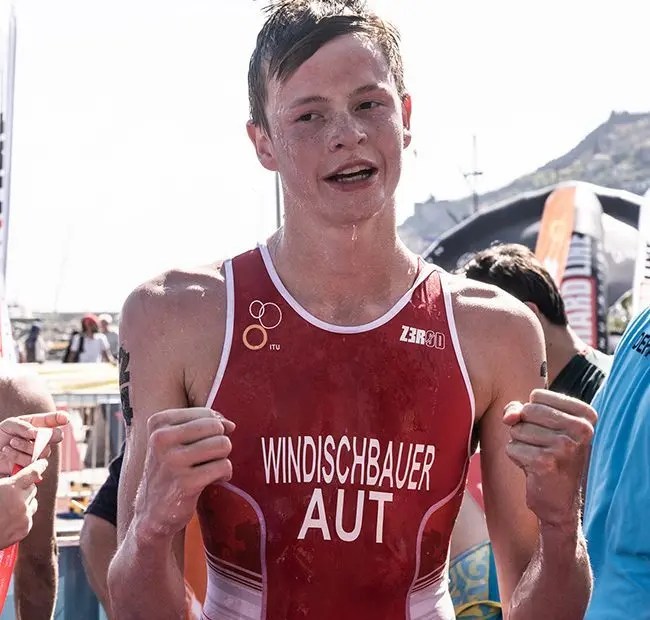 Thomas Windischbauer from the 1. Welser Schwimmklub has fulfilled the standard for the Junior European Cup in Wels. The OC team of the starlim City Triathlon Austria Wels cheers: "Unbelievable that we are now allowed to present a triathlete from our own ranks in addition to hosting the J-EC!"

The 1st Wels Swimming Club, which organises the "starlim City TRIATHLON AUSTRIA Wels" and in the framework of it also the Junior European Cup, followed today's ÖTRV Cup in the Südstadt with excitement. At the Swim&Run competition of the Austrian Triathlon Federation limit times were required in the individual disciplines and for the overall time. Among them was 17-year-old 1. WSK athlete Thomas Windischbauer, who has fulfilled the standard for participation in the 2021 European Junior Cup in Wels.

The Vorchdorf native already showed his talent during the swim. With the third fastest swim time of the day, he laid the foundation for this great success and was able to complete the 800m in a new personal best of 09:16.1. In the final 5 km run, which was started in the Gundersen method, the triathlon ace left no stone unturned. Lap after lap he was able to catch up with the leader and finally won second place in an overall time of 25:25.17.

The 5 km run time of 16:09,07 does not mean a new personal best, but due to the weather conditions this time is also very impressive. "After the swimmer Stefan Wipplinger, the triathletes Dominik Exel and Alexander Bründl, the 1. Welser Schwimmklub is proud to have Thomas Windischbauer as an international starter in the club. We are especially pleased that we, as the organising club, can present a triathlete from our own ranks at the Junior European Cup in Wels," said Thomas Alt of the 1. Welser Schwimmklub.

At the age of 9, the Vorchdorf native started his triathlon career. Due to the running enthusiasm of his parents Petra and Karl Windischbauer, the first discipline Thomas learned in a club was running. During the running training at Union Vorchdorf the triathlon talent developed his enthusiasm for exercise and competitive sports at a very early age. After several running competitions, the then 9-year-old tried his hand at triathlon for the first time as part of the Upper Austrian Power Kids Cup, a talent scouting programme of the Upper Austrian Triathlon Association. Thomas immediately took a liking to triathlon and without any specific triathlon training, he immediately finished second in the overall ranking of the Power Kids Cup.

Subsequently, he was invited by the then sports director of the Upper Austrian Triathlon Association, Thomas Alt, to attend a training session, where he finally started his triathlon training. After several top placings at Austrian championships in triathlon and aquathlon in various age groups, Thomas Windischbauer ventured into the Linz-Gugl Olympic Centre at the age of 15 and has been training for his ambitious goals under professional conditions ever since.

For Thomas Windischbauer the participation in the Junior European Cup in Wels also means the first start at the starlim City Triathlon Austria Wels. So far it has either not worked out due to competition overlaps, or at the event premiere in 2018 Thomas was still too young to participate in a sprint distance in triathlon. "The starlim City Triathlon Austria in Wels is definitely the highlight in this year's competition calendar for me. I am really happy to be able to compete in an international race at my home", says the triathlete.

Thomas can especially look forward to the new course., which was redesigned especially for the Junior European Cup. The Highlights are absolutely worthy of a city triathlon. Starting with the river swimming, the transition area in the Stadthallenpark, to the bike criterium in the city and the final run through the old town of Wels and the picturesque Burggarten, everything is prepared for a modern multi-lap competition.